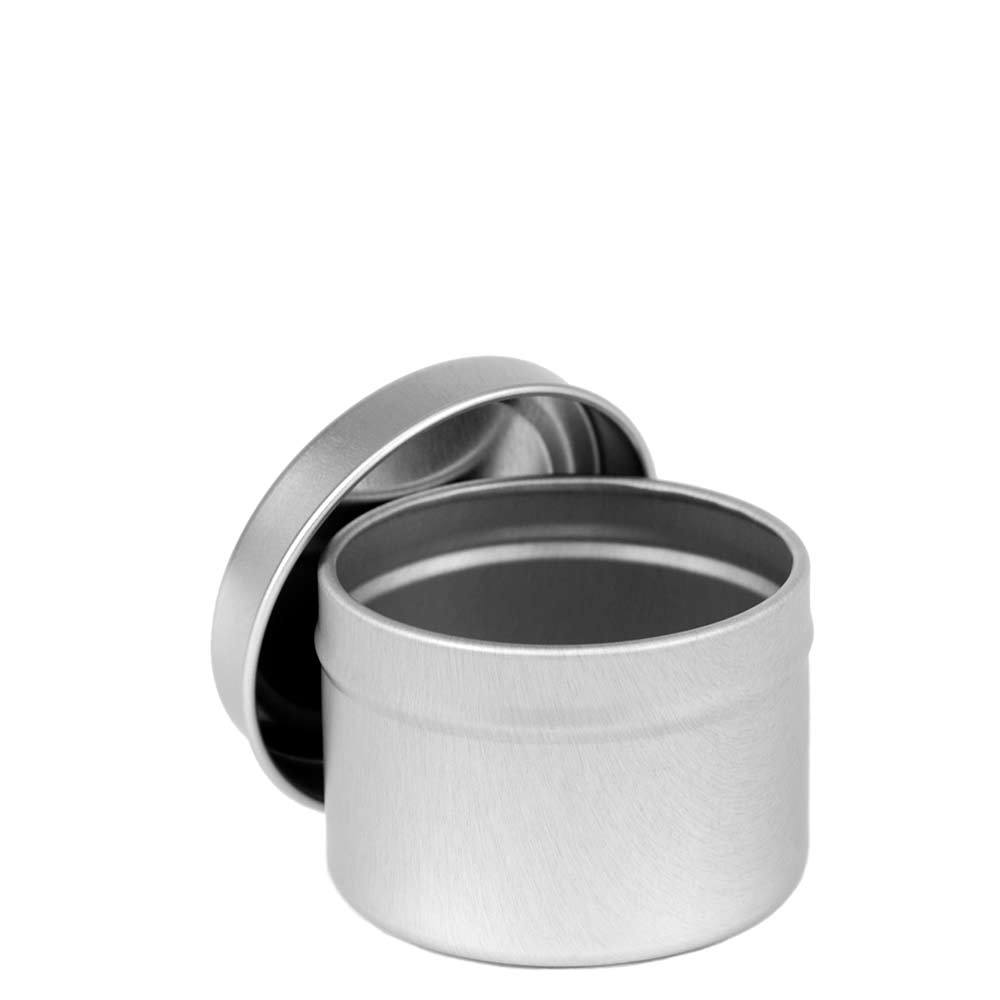 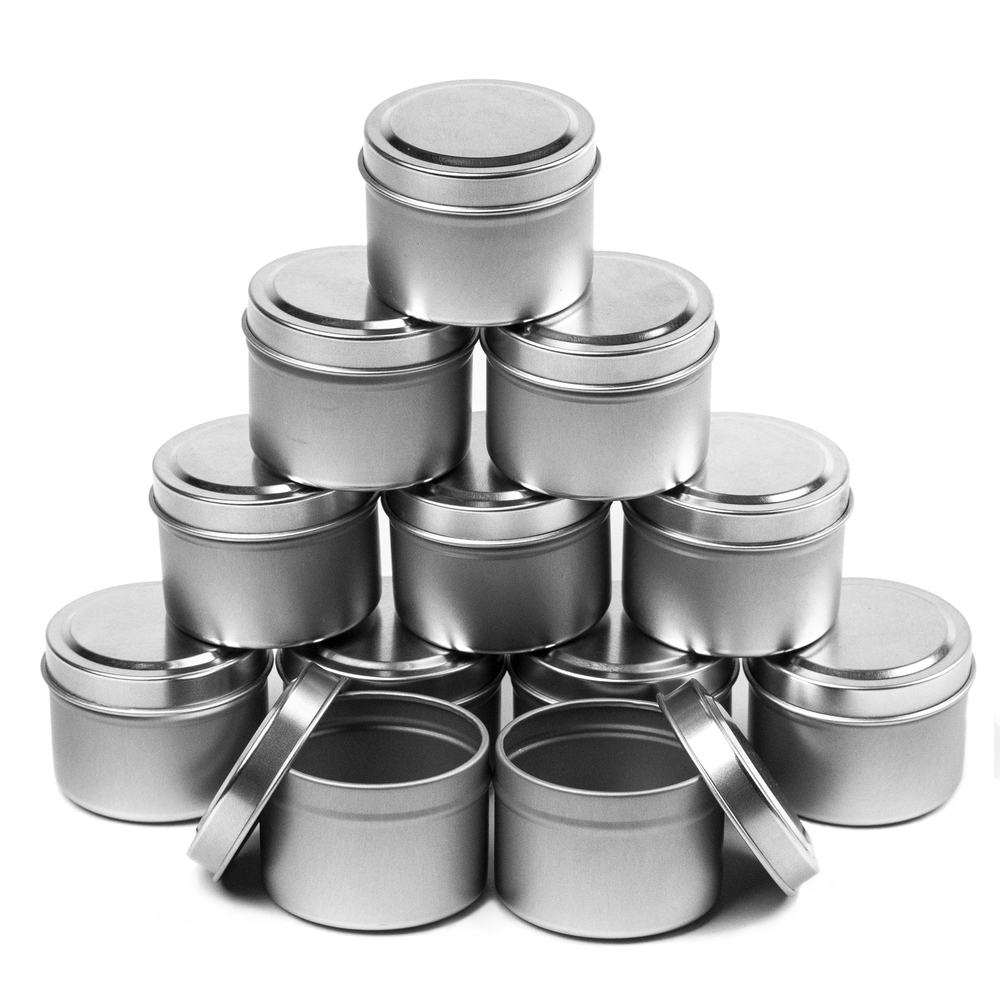 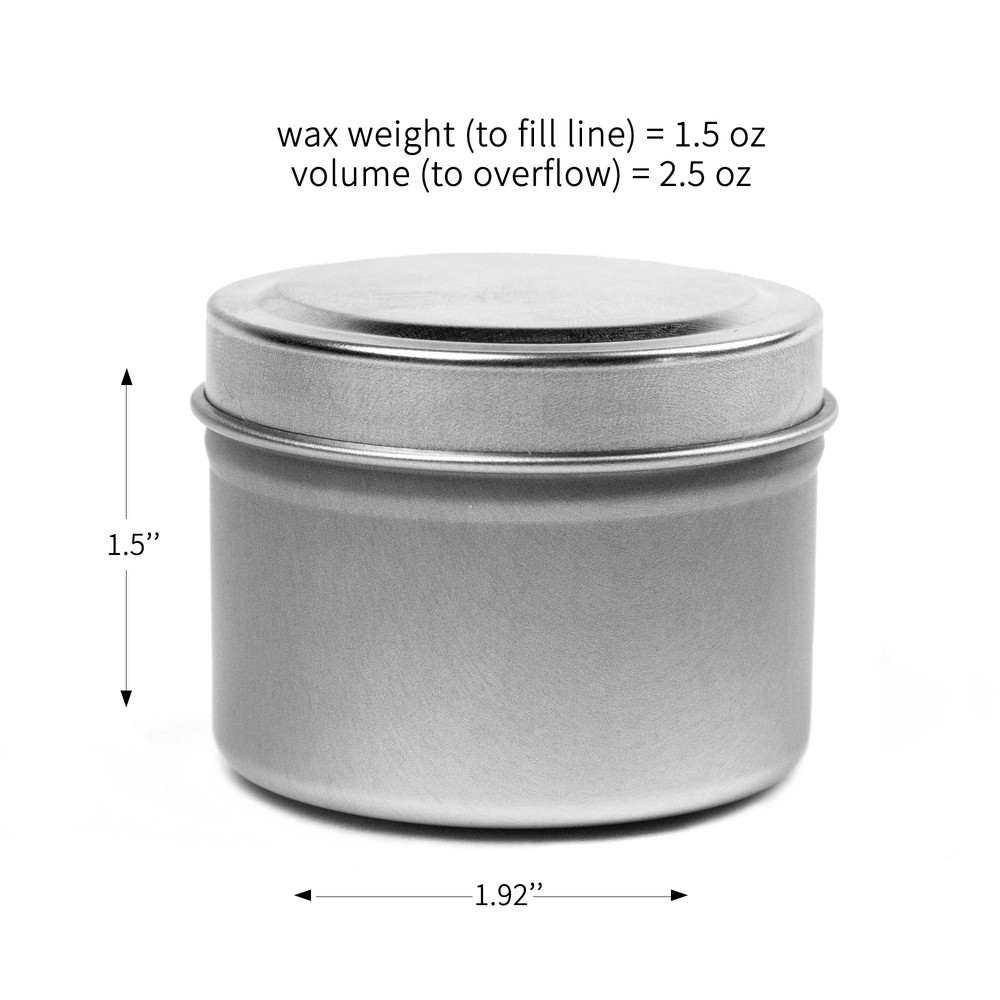 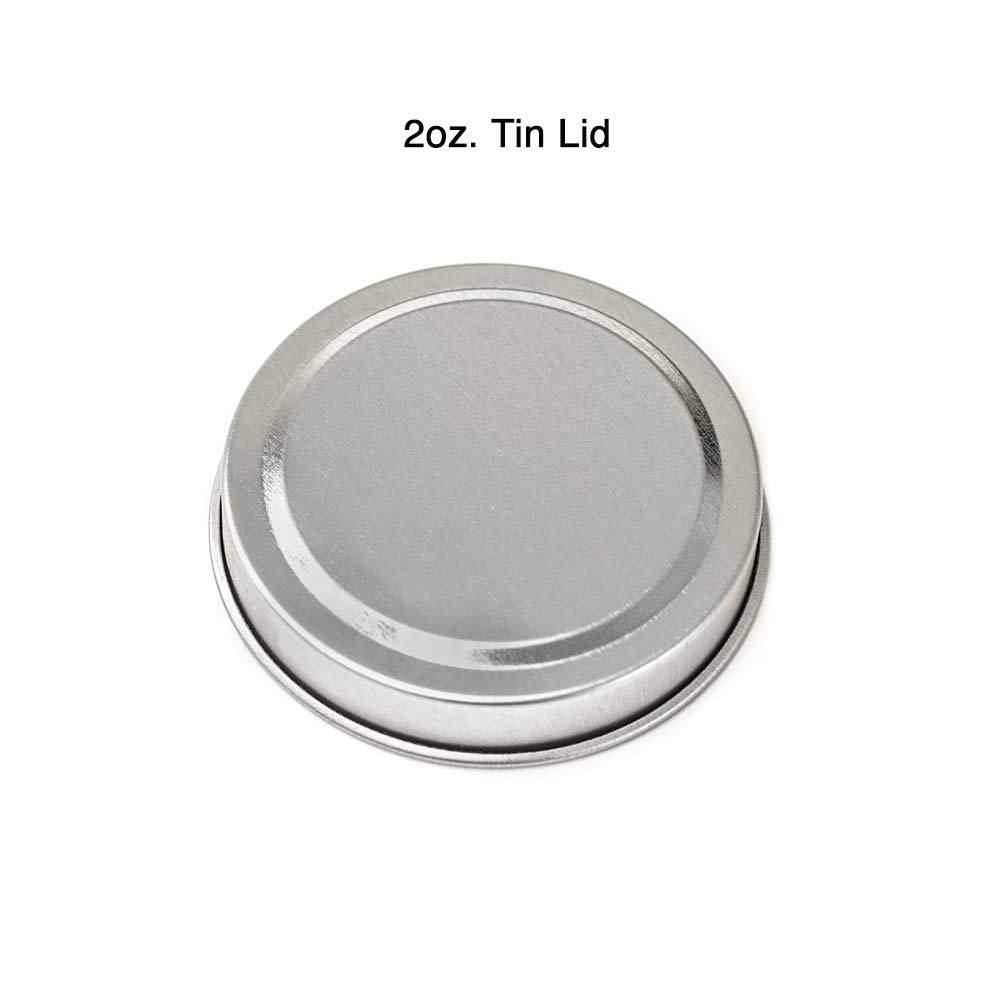 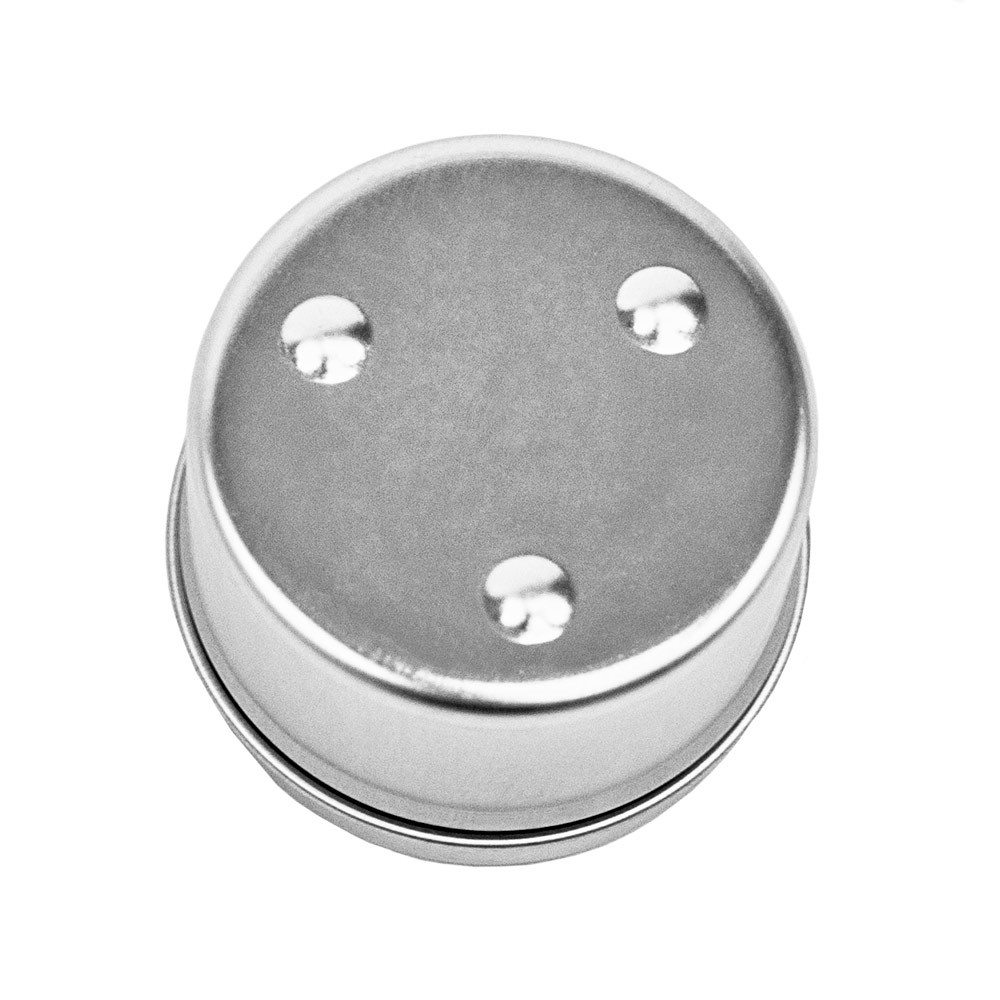 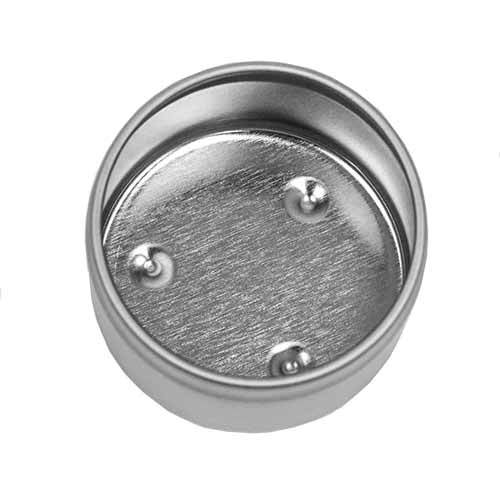 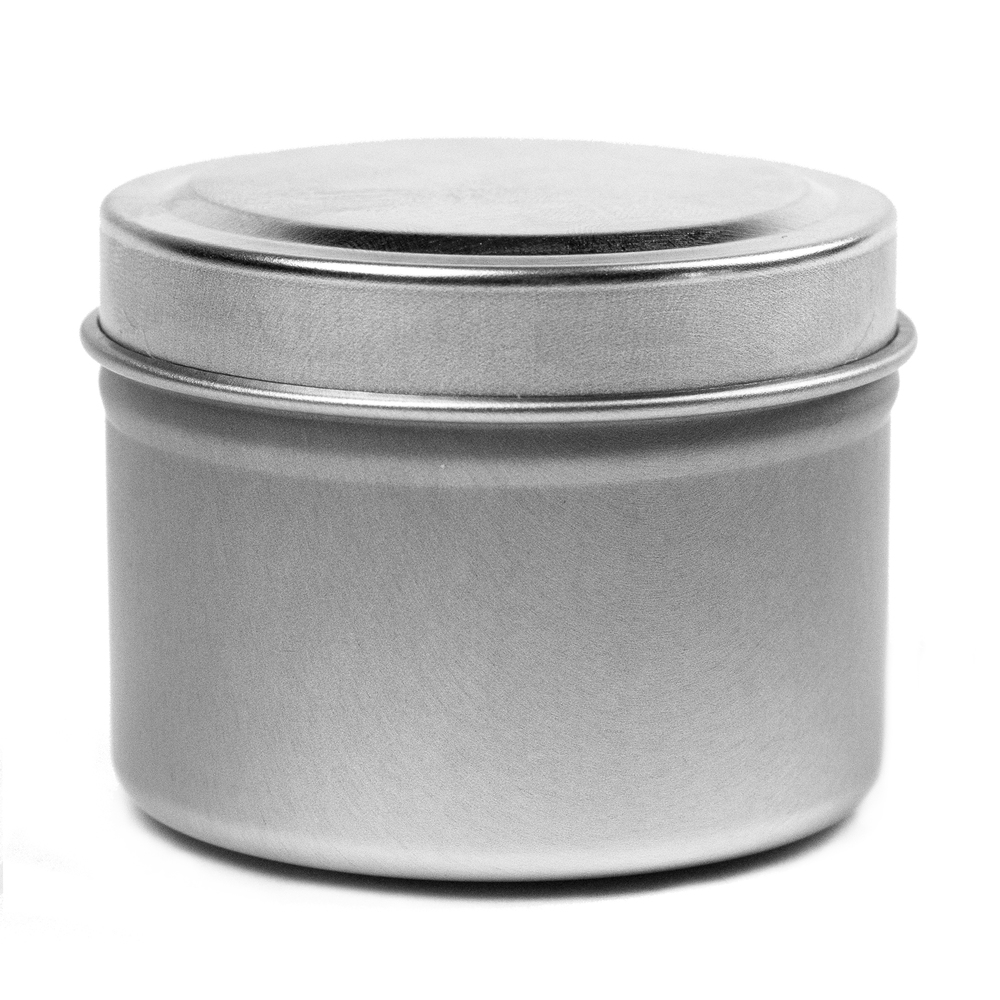 Candle tins are a great alternative (or complement) to traditional glass candle containers. Ours have a really nice finish and include snug fitting lids. The 2 oz size is great for free samples or as an inexpensive starter candle to get people hooked on your fragrances! CandleScience tins are made from steel and are safe and easy to use, thanks to:

Our candle tins have a varnish coating on the inside of the tin to help protect the metal from discoloring. Keep in mind that aroma components like citrus oils, cinnamon oil, and vanillin in fragrance oils can still cause the color of the tin to shift, particularly at higher fragrances loads.

Looking for a wick suggestion?
GB 464 - CD 4
IGI 4630 - LX 12
IGI 6006 - ECO 1
Check out our wick guide to see recommendations for other waxes! Our recommendations are estimates and should be used as a starting point for your own burn testing.

Made in the USA

Wholesale Ordering
Check out our wholesale page for more information on ordering candle tins and other candle supplies in bulk or by the pallet.

Do you suggest using their 1.5" round or a 2"? Quick custom order, I don't have time to test. Thank you.

I really liked the idea of these tins since several of my customers were looking for small samples of my scents. Several of these tins arrived with dents in them. One shipping box was damaged on the side so those were understandable. However, even some of the tins in the 'good' shipping box also had dents, these are not very strong. The other issue I had was that my wax turned brown on the sides with some of my scents. I admit there was a warning by Candlescience about this on the product page but I was hoping it wouldn't happen. Unfortunately, I don't think I would be ordering these again unless these two issues are resolved.

My only complaint is that they can get dings in them easily, but they're perfect for my line of mini candles!

Love these containers. They're adorable and such a great way to get customers to make a small purchase and sample product. Would be great if they could come in gold, frosted gold, or even rose gold.

Can anyone recommend a better wick for these? CS wick guide suggests ECO1 but those are only 1" tall and I don't want to have to leave a third of my jar empty on these. I also don't want to wind up with too large of a wick in such a small tin.
I'm using IGI 6006.

I’ve had two customers along with myself report that this size candle has burned through tables and mantles. I’m concerned for the safety of myself and my customers. Along with the fact that this is my business my name and reputation are on the line.

Hi! I'm glad we could work with you to help troubleshoot your candles and get to the bottom of the burn issues you were seeing. Let us know if you need anything else.

I love these so much they are the perfect size for samples and gifts. Highly recommend!

The size is perfect - love it! I can't seem to find a warning label small enough for this one. Does anyone know where to get them?

Love these little tins to use as samplers. Lately they've been out of stock every time I look, which is unfortunate since my customers love them!

You need gold colored! I would buy SO many :)

I love these little tins! Perfect for samples or testing out a new scent at home.

Hey !
Does anyone know a place to get sample boxes or packaging specifically designed for these little candles?

These are adorable, durable and excellent quality! I love them!

Since I am new to candle making, I've been wanting to make some sample candles to give to a few friends and family members to test to see if they like the fragrance. These are PERFECT for that. So happy I tried them out!

Great tins for little candle favors! All my lids stay on and they arrived in perfect condition.

These tins are wonderful in all ways & I'm here to pick up more. I haven't had any issues & my customers love them too-- thank you!

I have been ordering these to use as sampler sizes and have had no problems. I have had maybe 1 or 2 lids pop off on there own out of over 100 tins I have handled. I have not had issues with discoloration like another reviewer did. I ship these tins in bubble mailers and have not heard complaints from any customers that there was a problem during shipping. Very happy with these tins, to the point where I am now buying the 4 oz tins as well.

These tins are very cute, haven't rusted for me and look great. However my lids keep popping off on their own. Push on them too hard and they dent. So I likely won't reorder these! I can't ship them because the vibrations cause the lids to just pop off and could potentially damage the smooth finish of the candle.

I just got my candle tins in the mail today!!! I ordered the 2oz tins to have for samples. I'm using the Soy 464 golden brand. I can't wait to see how they turn out.

These tins are affected by fragrances like cinnamon and vanilla. I have two 2 ounce tins with discolored (like rust) insides.

These small tins are the perfect size for your customers to purchase when they want to sample a fragrance. I also use them in gift baskets.