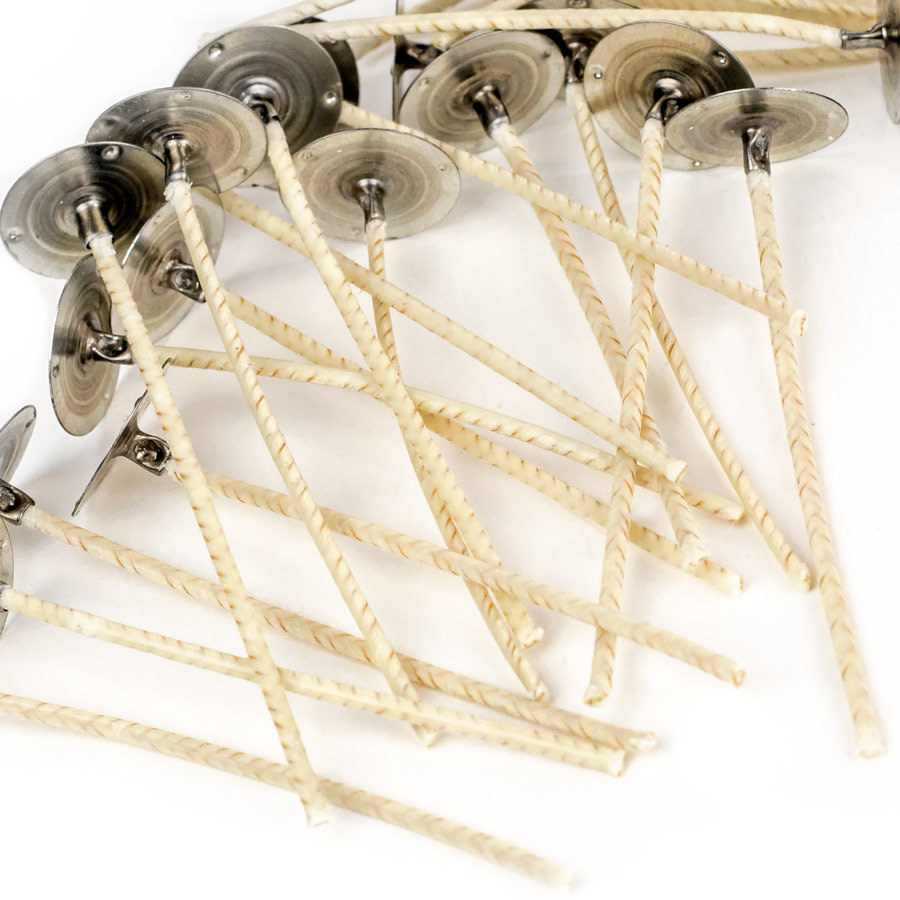 About the CD Series
CD (Stabilo) wick is a flat braided cotton wick with paper threads woven into the cotton. The reinforced construction of the wick is designed to ensure a consistent burn with higher fragrance loads, especially with softer, more viscous natural waxes. The superior rigidity of CD wick allows the wick to stand up straighter for easier pours and keeps the wick upright in a deep melt pool. Note: Any carbon buildup should be removed once the wick is extinguished. CD wicks are lead and zinc free.
For help choosing the right wick for your candle, visit our wick guide.

I used CD4 for 2oz tin. I got full melt and mo tunneling but I noticed that the flame is kind of small. I wish CS sell wick sample kits for different types of candles like they used to (not sure why they stopped doing this. Make less money or something??). Now I need to wait till wicks are available. It’s just annoying to buy bulk that I don’t end up using.

I use 4 oz round tins with a diameter of 2.7 aprox. and decided to try the CD4 and CD6 wicks. Surprisingly they both worked well in my test. CD4 was just slightly better because the flame slightly smaller, but in the 3 hour test they both melted up to the borders of the tin, almost at the same time, no tunneling. Note that CD6 is almost equal to CD4, so if you need a stronger wick than CD4 because of tunneling, you should skip CD6 and go for a higher one. I use 464 wax, but am going to be changing to Coconut wax soon. Hope to get the same results with it too. Lets see.

While this wick does not flicker and has a subtle flame and remains lit, at 1 hour mark, it did not melt the entire diameter of my 3x2" metal container. I will try the next size up. Just wish they had a CD 5 in the 3" wick.

After doing multiple burn tests, I realize that this wick performs much better than I previously thought. During the first round of tests, I could barely get a flame and I wouldn't achieve a full melt pool until 3 hours into the burn. However, I was able to get a full melt pool at around one hour into the burn and I had a much healthier flame during my second and third round of burn tests. I think part of the problem I had before was that I trimmed the wick too short towards in the beginning of the very first set of burn tests because the wick just never recovered after that.

I usually love the CD series, I use them for all of my larger jars, but when I was testing these using GB 464 in the 4oz straight sided threaded jar I was very disappointed. I can't even reach a full melt pool until three hours into the burn. Luckily, I found a better wick through burn tests before I started selling any jars, but I won't be using this size CD wick. Maybe I'll have better luck using these with other jars.

I just tested these along with CD6 and was disappointed with both. They both had qualities that the other one lacked. For example I loved that the CD 4 had virtually no soot or smoking, whereas the CD 6 made my candle smell so awful because of the smoke and soot. Also I loved how slow the CD 4 wick burned however the burn pool never reached all the way to the sides, nor did it get very deep, but the fragrance was far better than the one with the CD 6 wick. The CD 6 wick's burn pool was perfect and neither of these wicks mushroomed. BTW I was testing in a 2.7" tall with 2.16" diameter straight sided jar from this site. Overall they both posses certain great qualities but the qualities they each lack compromise the quality of my candles so both are unusable for me.

I used the CD 4 3" wick in a 6oz, 2.13" diameter, straight side glass jar with coconut paraffin wax. It burns really well and creates an even melt pool. I plan to buy more and would recommend this wick to others.